Trail to the ice caves

About 20 miles outside of Marquette is one of the Upper Peninsula’s most fantastic, but among the least visited, winter sights: the Eben Ice Caves. Located in the Rock River Canyon Wilderness outside the tiny town of Eben Junction, the ice caves are formed as snow melt runs over a cliff and solidifies forming fantastic 60 foot tall ice formations. Once the ice begins to form, normally some time around December or January, Eben Junction starts to bustle with activity as thousands of people travel to see the magnificent sights.

Reaching the caves is not too difficult. Once you’re in Eben, there are bright yellow signs pointing the way, helpfully labeled, “ICE CAVES,” that will direct you down a couple of secondary but plowed and maintained roads (a normal front wheel drive car should have no trouble). After you reach the parking area, a local farmer’s field, the actual hike out to the caves is a short half-mile jaunt. The first portion is flat as you make your way through the field but once you get into the woods, the trail begins to undulate before descending into the canyon and can be very icy; I spent more than a few portions of the trail sliding down on my rear-end as I forgot to pack my ice cleats. Unless you are the first person visiting after a major snowfall event, the trail is extremely well packed down and easy to follow, so snowshoes are probably not necessary. Ice cleats, on the other hand… 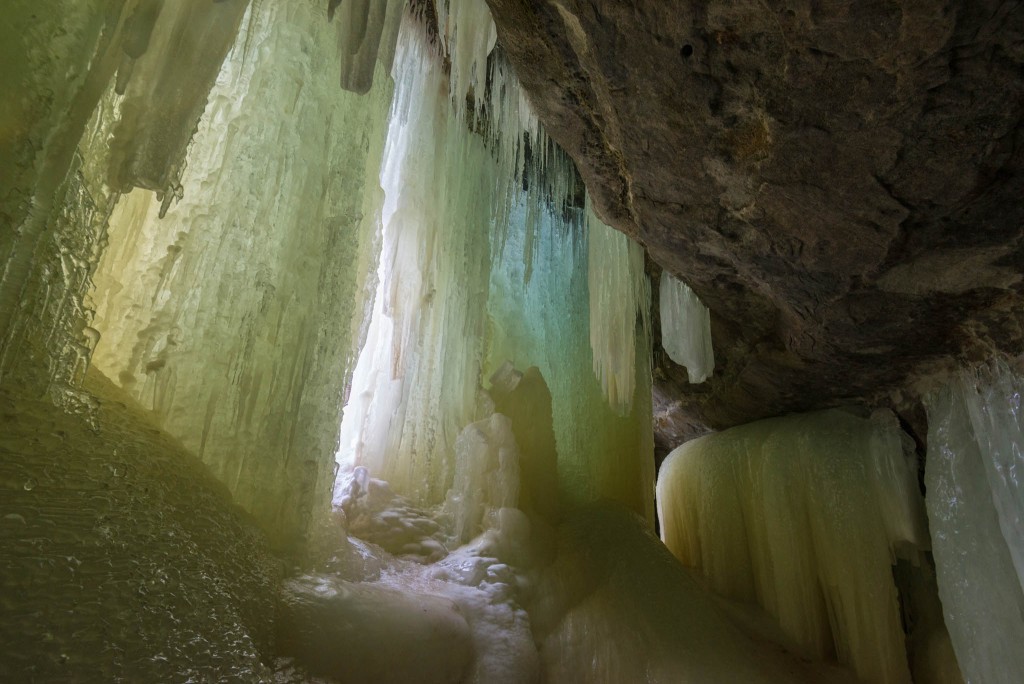 I intentionally made the trip early on a Saturday morning and arrived around 9:00AM and had the entire area to myself for the better part of an hour. Similar to the Grand Island Ice Curtains, there is room to get around and behind the ice formations that provided for stunning views. The fantastic visuals were paired with a striking sound; much to my surprise, I heard water gushing behind the ice formations! After spending almost an hour slipping, sliding, and nearly bashing my camera lens in—I have one less functional lens cap than when I set out—I headed back to my car and passed no less than 70 people heading in to see the caves.