The Chapel-Mosquito loop is one of the most spectacular day or weekend hikes in Pictured Rocks, if not the entire Upper Peninsula. There are two fantastic waterfalls, two gorgeous, but strikingly different, beaches, and a hike along 200 foot high cliffs offering incredible views of the sandstone rock formations that will not soon be forgotten.

The first part of the adventure, though, is actually reaching the trail head. Although H-58, the road that runs the length of the park and allows access to everything in the park from Miner’s Castle (via H-11) to the Grand Sable Dunes, is fully paved, the Chaparral Road that leads to the trail head is a different story—it is a dirt road that is filled with deep ruts and portions of it are very rough. A normal car shouldn’t have too much trouble so long as you take it nice and easy.

The loop itself begins at a dual trail head: Mosquito Beach, Mosquito Falls, and Chapel Beach are all directly accessible on the left trail while Chapel Falls and Chapel Beach can be reached using the right hand trail. My preferred direction is to tackle the loop clockwise (hike to Mosquito Falls and Mosquito Beach and loop around to the Chapel area), though this does back-load some of the the most fantastic sights to the latter half of the hike, but either direction is fantastic. The loop is well maintained and signed but, like all trails in Pictured Rocks, not blazed; it can be muddy in the spring and early summer or after a rainy day. 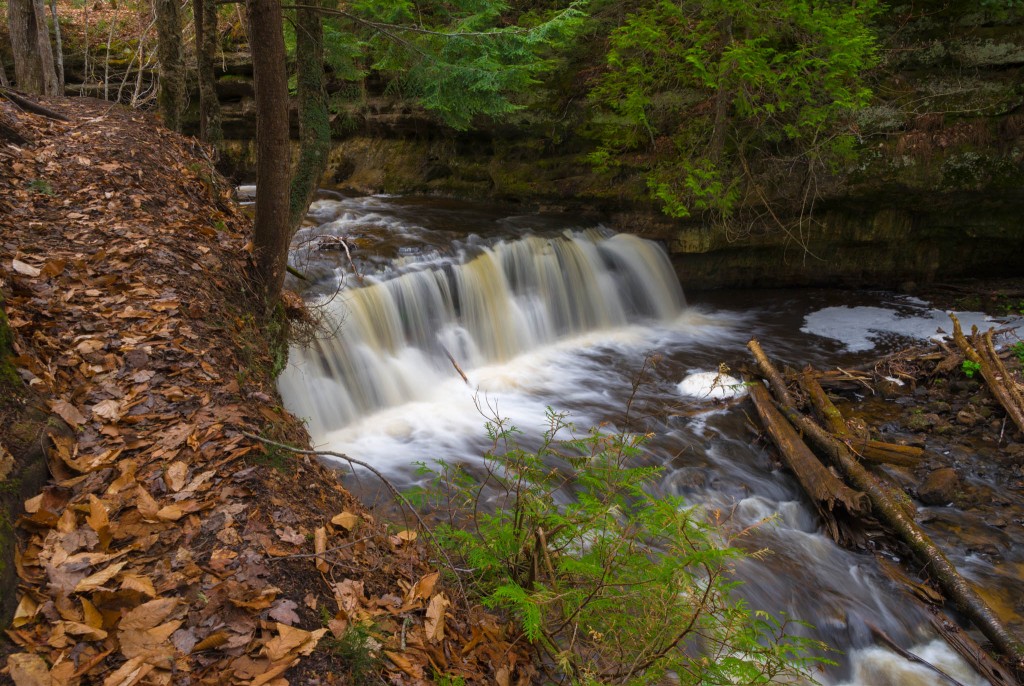 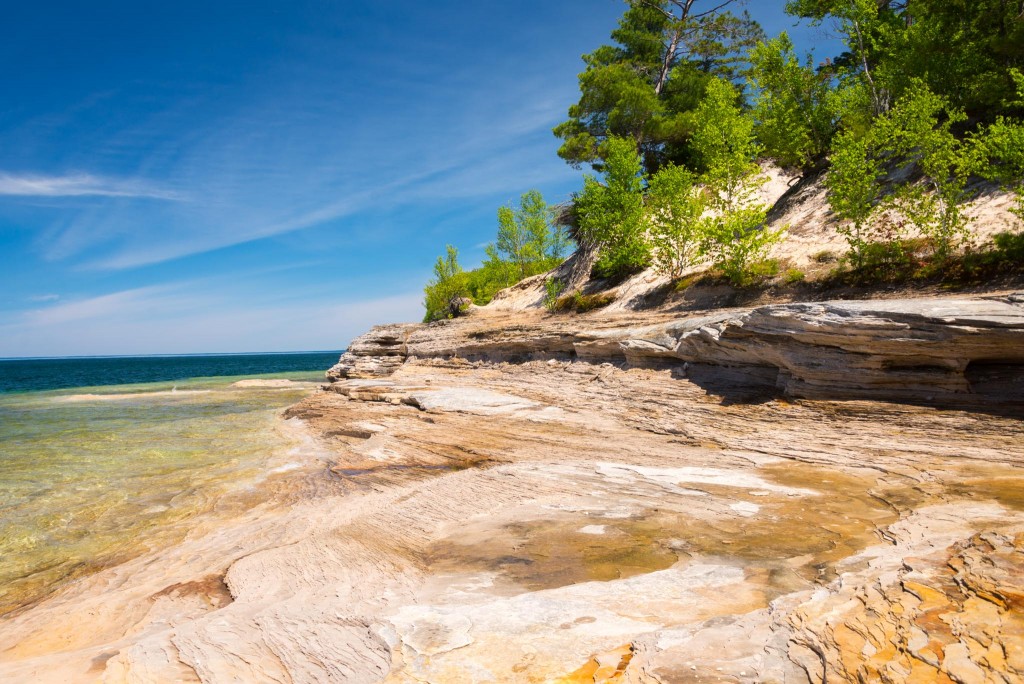 After several descents and ascents along the trail you’ll reach Mosquito Falls, along the Mosquito River, which is the first major landmark along the hike. It is one of the smaller waterfalls in the park, at a relatively small 10 feet tall, but it is much easier to get good viewing angles of the cascades than at Chapel Falls. A little ways further up the trail is an additional 5 foot drop. I should also note, the falls and the river are well named; if you’re not wearing bug spray and it is bug season, you may get swarmed by mosquitoes.

After crossing over the Mosquito River, the trail will meander in the woods before rapidly descending to Lake Superior and Mosquito Beach. The beach is split by the Mosquito River: the west side is sandy but filled with large boulders while the opposite bank is comprised of beautiful sandstone terraces, several of which extend in to Lake Superior to form large sandstone shelves which are visible from the trail. 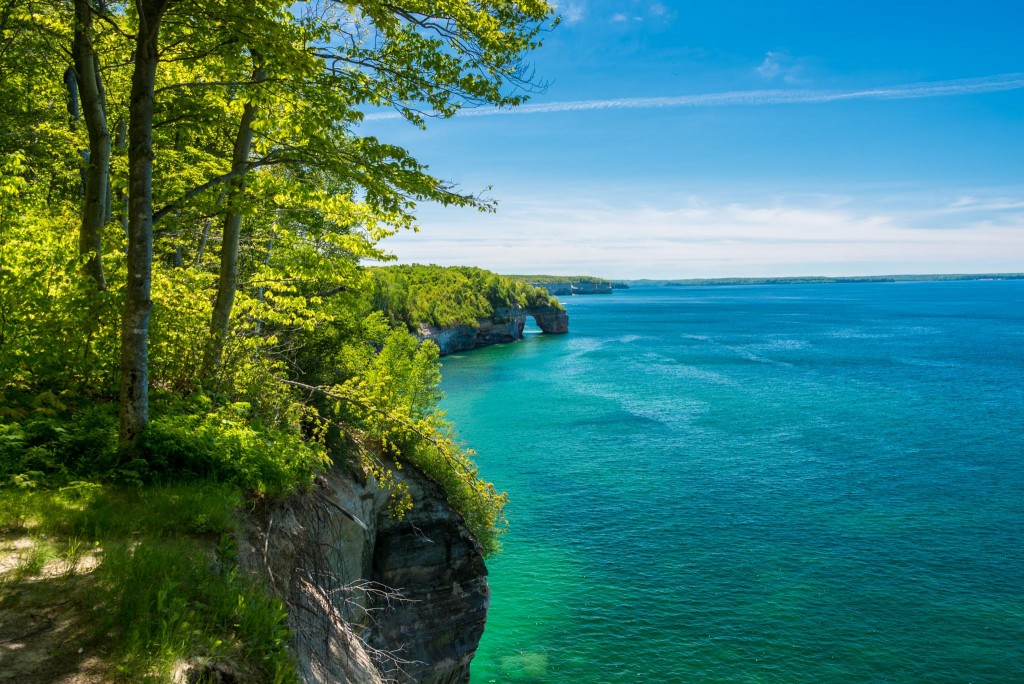 After leaving Mosquito Beach, the trail will begin to ascend up to the cliff tops. The first major rock formation you’ll come across is Lovers’ Leap and Petite Portal that jut out into Lake Superior. There are various legends regarding origin of the romantic name but most of them involve a smitten couple hurling themselves off the cliff in a show of their undying love for each other (NOTE: do NOT attempt as the water is a paltry 3 feet deep at the base of the formation!). 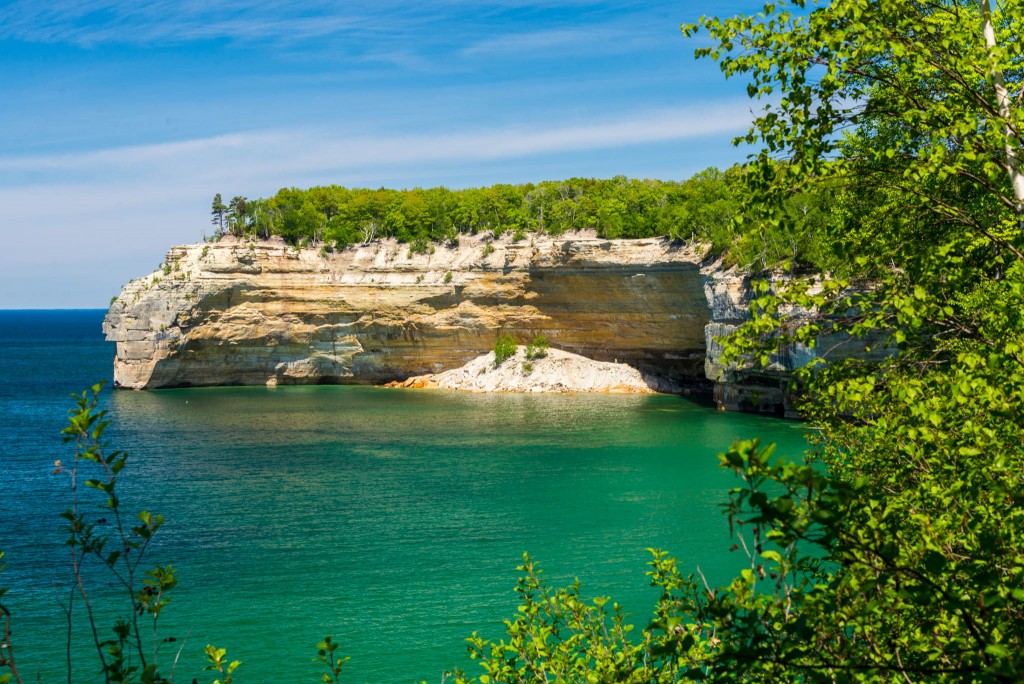 The next major landmark along the hike is Indian Head, a huge sandstone promontory. You’ll know that you’re close when the trail quickly ascends. Once you reach Indian Head, you’ll emerge out on to the open cliff tops and be able take in the spectacular view (it’s, basically, a beach that is 200 feet above the water’s surface). One of the more striking visuals is the large rock formation rising up from the water where, during certain portions of the year, gulls will roost in large numbers. 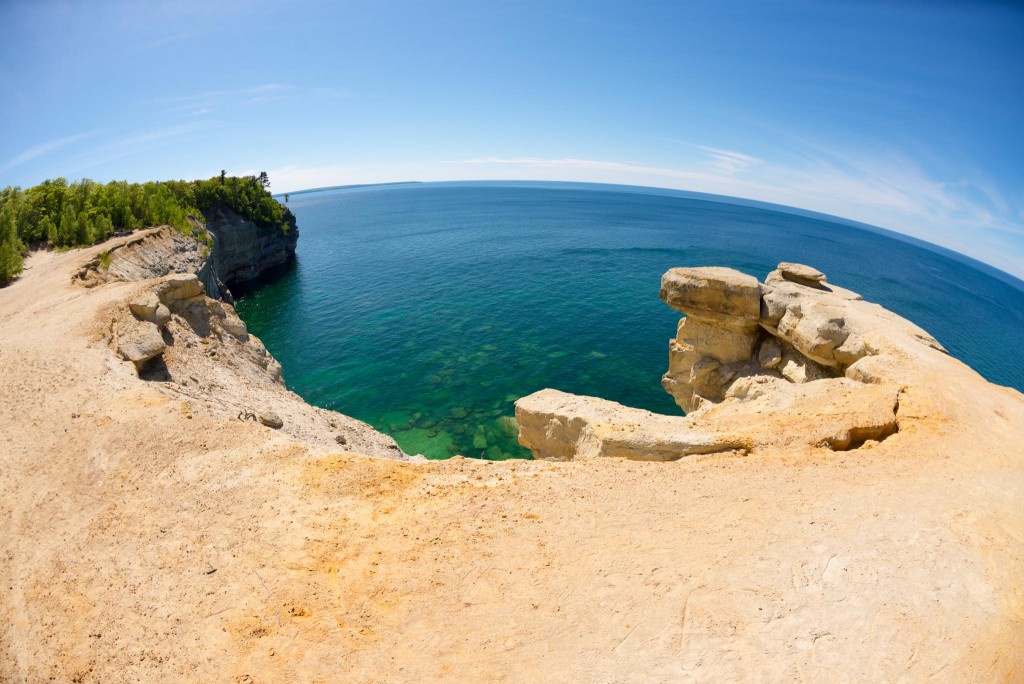 A short ways down the trail you’ll reach Grand Portal Point. Similar to Indian Head, you’ll be able to get out on to open cliff tops to see the fantastic cliffs surrounding the point and the gorgeous clear waters of Lake Superior. The actual stone portal for which the point is named collapsed in 1900, though the debris from the collapse is still visible along the cliffs.

After Grand Portal Point, the trail will descend and there will be another partially collapsed portal; this formation collapsed sometime during the winter of 1999-2000.

The final two formations along the trail as you close in on Chapel Beach are Battleship Rocks, named because of their resemblance to the hulls of battleships setting sail, and Indian Drum, water eroded holes in the cliff face that, on days when there is substantial wave action on the lake, will produce loud drum like sounds from the water smacking against the interior walls. 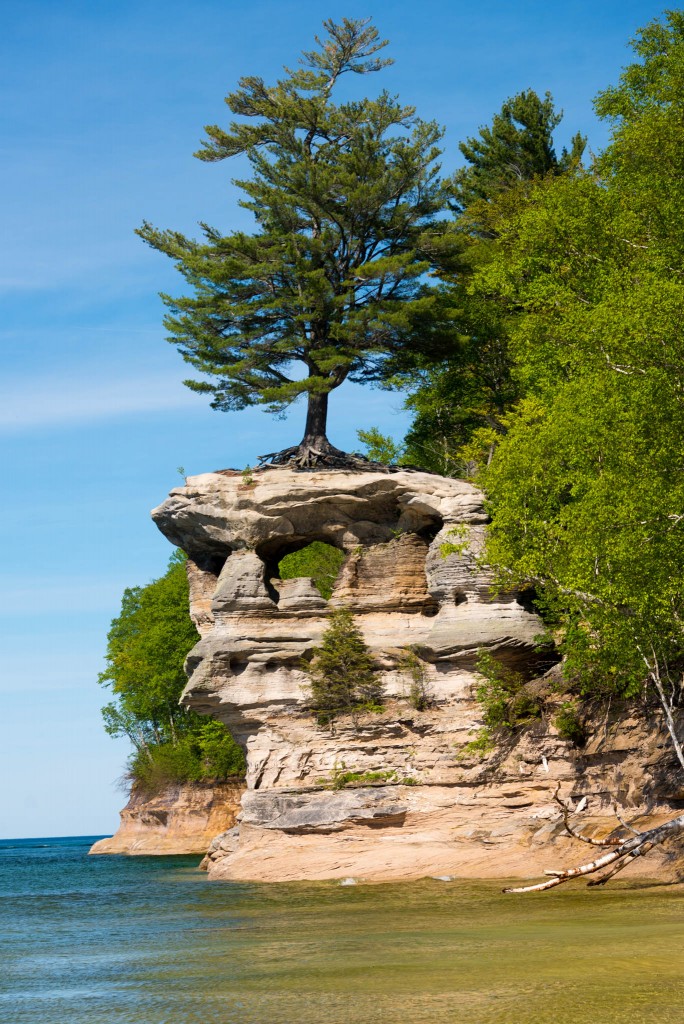 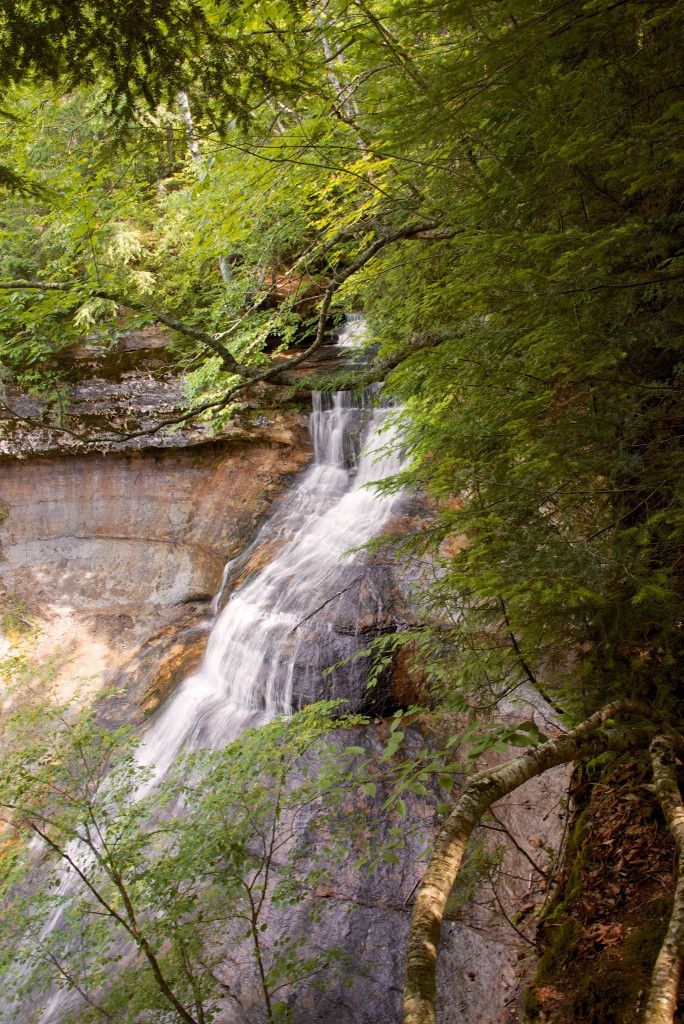 Unlike Mosquito Beach, Chapel Beach is a gorgeous white sand beach that extends for several tenths of a mile. On one end, you can see magnificent views of the cliffs and on the other side is a small waterfall and one of the most well-known sights around the area: Chapel Rock. The creek (Section 34 Creek) and waterfall are much warmer than Lake Superior and it is not uncommon to wade around in the plunge pool area after the long hike. Chapel Rock, just beyond the end of the beach, is unique for two reasons: the first are the Swiss-cheese like holes in the rock; the second is the tree that crowns the formation whose roots extend across a gap to reach land.  There was, likely, an arch that the roots grew across that has since eroded away or collapsed.

After leaving the beach, the trail will quickly ascend and you’ll reach the impressive 60 foot tall Chapel Falls. Although it is possible to reach the bottom of the falls, I’ve never been able to figure out how to pull that off. The two viewing areas do provide for great views of the falls. Right above the falls is an unnamed five foot drop.

The remainder of the trail is relatively flat and follows an abandoned road grade. The alternate path back, which runs through the campground, to the trail head bypassing Chapel Falls does allow for a quick view of Little Chapel Lake but is, otherwise, unremarkable.

Want to see more pictures from the Chapel-Mosquito loop or other spectacular sights from Pictured Rocks? Check them out at my photography page on Facebook and select any of the Pictured Rocks albums: https://www.facebook.com/erichackneyphotography